THE MOST AUGUST AND MOST ANCIENT
IMPERIAL ORDER
OF
SAINT HELEN 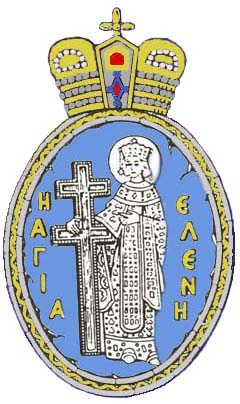 THE Order was founded by the Emperor of the Romans, Flavius  Constantine the Great and Saint to commemorate the Discovery of the Holy Cross by his Mother, the Empress Saint Helen, who in the course of her dreams envisioned that the Holy Wood was buried in Jerusalem under a growth of fresh and fragrant sweet basil.

The Empress recounted her vision to her son and Constantine ordered that excavations to that effect be carried out.

For Christianity and for the Roman Byzantine Empire, it was during Saint Helen's trip to Jerusalem that such a great discovery took place. It occurred under the rule of Dracilianus in Palestine and during the Patriarchate of Macarius, the hermit of Thebais. A celebration of the inauguration of the Temple or the Basilica of the Resurrection also took place at the site where the Cross was found on May 3, 330 of our Era, the Feast Day of the Discovery of the Holy Cross.

Constantine decided after the Discovery of the True Cross that this Divine Sign to which he owed his victories, the glory and his power, should become the emblem to be placed on the Labarum of the Empire of Rome. He decided also to institute an official decoration of the Roman Empire, thus founding this August Order which was established after the Constantinian.

To glorify and perpetuate the discovery made by his Saint Mother, the Emperor desired that the new Order be conferred by means of a medal bearing the effigy of his Mother, made in such a way so as to contain a small particle of the Sacred Wood found by Saint Helen.

The Emperor himself was the exclusive chief of the Orders of Saint Constantine the Great and of Saint Helen. Prior to his death, Constantine decreed that the Order must be preserved for the Empire and asked that his successors respect his last will in deference to his August Mother. The Order of Saint Helen, containing the sacred relic, was considered the highest recompense and a precious memento on the part of the Emperor and was awarded to the most elevated personalities of the Empire and was thus a difficult acquisition.

The succeeding Emperors of Constantine the Great respected his mandate and the Order was continued in the Roman-Byzantine Empire, enduring over the centuries to this day. Its decorations are bestowed by the Imperial and Royal House Lascaris Comnenus.

In accordance with ancient standards and to confirm established custom, it is awarded to ladies only. The Order of Saint Helen thus becomes the feminine counterpart of the Order of Constantine the Great. Both Imperial Orders complement each other historically and are branches of the same trunk. Both were founded by the same Emperor, sustained and conveyed by the same Empire and Imperial House.

Grand Sovereign Master of the Order of Saint Helen is H.I. and R.H. [His Imperial and Royal Highness] the Prince Theodore IX Lascaris Comnenus.

The decoration consists of a circle with the image of Saint Helen bordered around with the inscription: "Order of Saint Helen Empress." The circle is surrounded by four semicircles in the form of a cross. On the uppermost rests the Imperial Byzantine Crown; in each of the lateral ones, a half eagle; and in the lower one, three keys interlaced. The field is gold. The colors of the Order are azure and white.

Dr. Peterson has worked as a family economics and management specialist with the University of Missouri and management specialist with the University of Missouri and as staff research associate in behavioral science at the University of California, Davis.  She brings to TRINITY a rich background in the arts, humanities and sciences as well as Biblical Studies, Theology and Counseling.  She is a member of the American Benedictine Academy and has served many years in all areas of higher education, including research, teaching, and extension.  Her publications include many scientific journal articles on women's lifestyles, health and nutrition, and a book on problems of aging.  Dr. Peterson extends a cordial invitation to all our readers to visit TRINITY.  Enter below:

THE
ORDER  OF  SAINT  HELEN
AWARDED  TO
LADY  MARY  PAPANICOLAOU 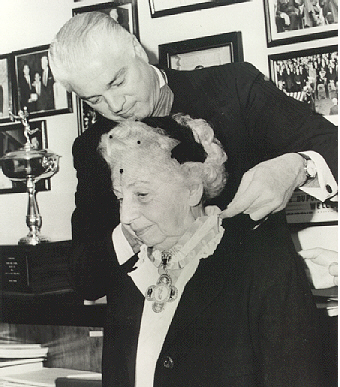 Lady Mary Papanicolaou, spouse and close collaborator of Dr. George Papanicolaou (1883-1962),  famous for his development of the "Pap Test," is awarded the Order of Saint Helen in  honor of  her important contribution to medical science as an assistant to her husband.

The Honorable Chuck Hall,  Mayor of Metropolitan Dade County and Knight of the Order of Saint Constantine the Great, performed the act at the County Court House in Miami, Florida. 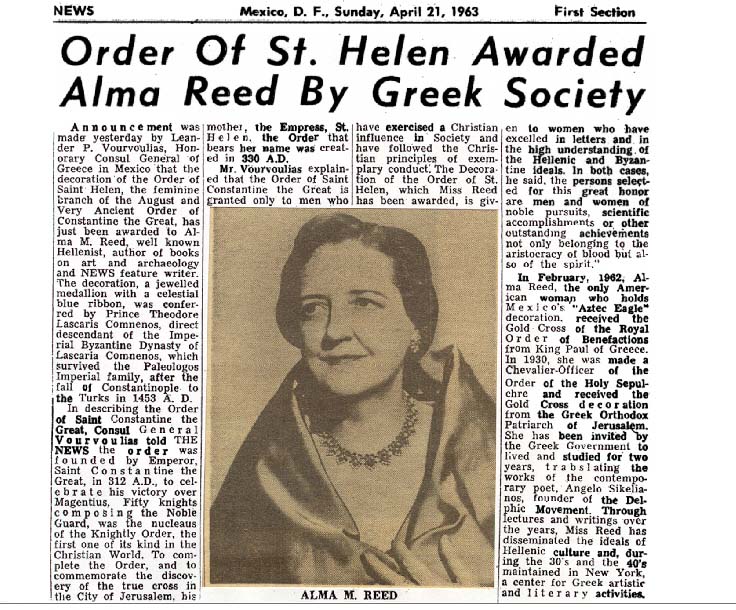 NEW BYZANTIUM is The AMERICAS
We are sincerely pleased you have come to visit our Site and we extend to you our warmest greeting in the highest tradition of BYZANTIUM.  Our Principal goal is to impart to you heretofore intentionally little known facts about BYZANTIUM as the foundation of Western Civilization.  We will avoid knowingly withholding the truth as an aim to social disorientation.  Practice of historical deception must cease.  We hope that you will enjoy our contribution to the fullest.  Welcome.
Constantine the Great began his eventful climb in York, England and reached the apex of his achievement in Constantinople, the City that he founded and named after himself (Constantine+Polis [city]=Constantinople).  By means of these pages, our readers travel through time, touching upon the early periods, including that of Constantine, of historical Constantinople, and of Hagia Sophia—the nexus of the Christian world—to arrive at places and events of our present day.  Our readers reach the outermost limit to which both Eastern and Western Christian groups expanded, bringing forth the flower of Western Civilization.  That limit is the Western Hemisphere as a whole, and in particular the coast of California near San Francisco and the Golden Gate Bridge where the two groups converged  as they approached from the North and from the South.