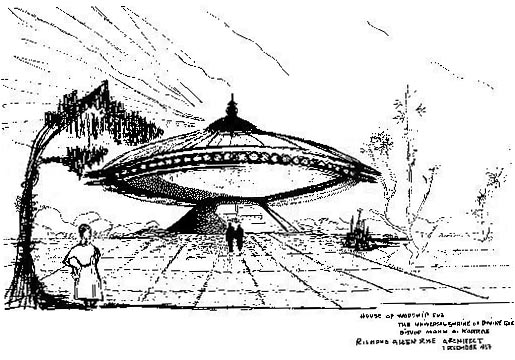 On October 30, 1990, Karras approached The Honorable Art Agnos, then Mayor of the City of San Francisco, with a written proposal as excerpted below.  Both the project proposal and the Mayor's response are reproduced in this page for public viewing and consideration.  It is fitting to mention that the proposed structure lends itself to a variety of cultural functions, such as musical concerts, lectures, classical theatrical performances, art displays and the like.  Furthermore, the Mayor's response was not affected by the above architectural design, because the design was never submitted for consideration.

This unique structure will embellish the Bay of San Francisco, will punctuate the presence and identity of  the Pacific rim, and will also become a global symbol and source of inspiration:  New York has its Statue, Sydney its Opera House, Athens its Parthenon, Paris its Tower, Tokyo its Mount Fuji, San Francisco its Golden Gate, London its Big Ben, Seattle its Needle, Rio its Sugar Loaf.  What is then to be said of the farthest reach westward, the Pacific Coast of The AMERICAS? (See: newbyz.html for more background).

The Mayor's hopeful and informative response: 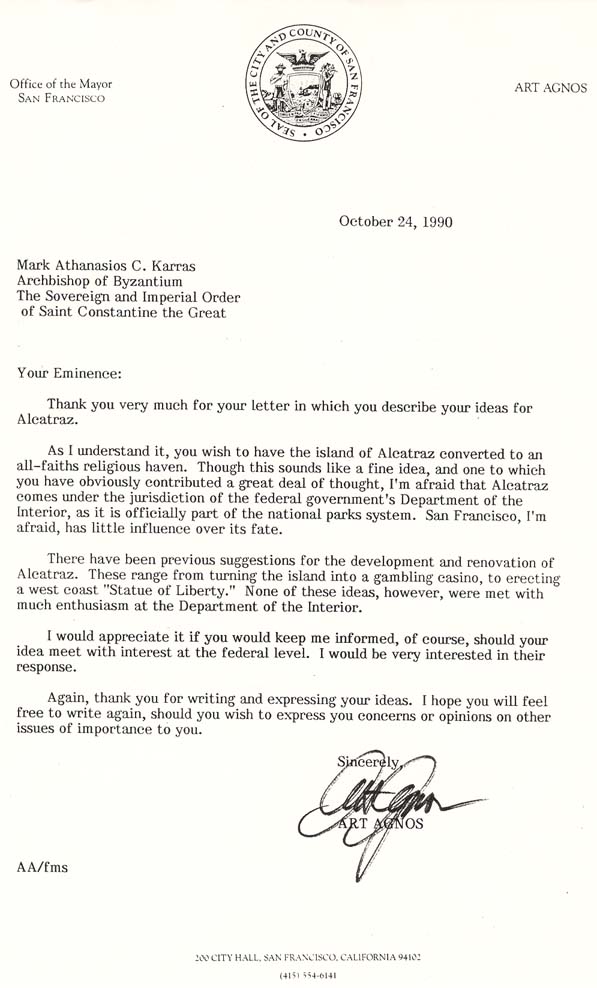 The Fall of Constantinople and the Dome of Hagia Sophia:

NEW BYZANTIUM is The AMERICAS
We are sincerely pleased you have come to visit our Site and we extend to you our warmest greeting in the highest tradition of BYZANTIUM.  Our Principal goal is to impart to you heretofore intentionally little known facts about BYZANTIUM as the foundation of Western Civilization.  We will avoid knowingly withholding the truth as an aim to social disorientation.  Practice of historical deception must cease.  We hope that you will enjoy our contribution to the fullest.  Welcome.
Constantine the Great began his eventful climb in York, England and reached the apex of his achievement in Constantinople, the City that he founded and named after himself (Constantine+Polis [city]=Constantinople).  By means of these pages, our readers travel through time, touching upon the early periods, including that of Constantine, of historical Constantinople, and of Hagia Sophia—the nexus of the Christian world—to arrive at places and events of our present day.  Our readers reach the outermost limit to which both Eastern and Western Christian groups expanded, bringing forth the flower of Western Civilization.  That limit is the Western Hemisphere as a whole, and in particular the coast of California near San Francisco and the Golden Gate Bridge where the two groups converged  as they approached from the North and from the South.